Stena Germanica is the first commercial marine vessel to run on methanol.
The RoPax ferry operates on the Gothenburg–Kiel route for Stena Line.
Stena Germanica is the biggest ferry in the Nordic region and the second biggest Ro-Pax ferry in the world.
The new conversion project enabled the ferry to reduce SOx emissions by 99%, Nox emissions by 60%, particulates by 95% and carbon dioxide by 25%. Image courtesy of Remontowa Shiprepair Yard. 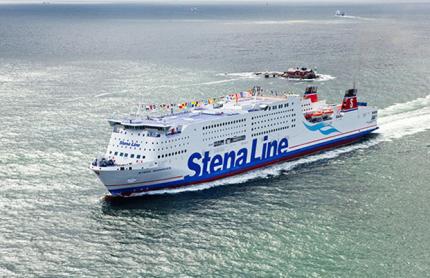 Stena Line started conversion of the Stena Germanica RoPax Ferry to test the viability of using methanol as marine fuel in January 2015. The pilot project was launched in March 2015.

The conversion was performed at Remontowa Shiprepair Yard, a member of Remontowa Holding in Gdansk, Poland. The project was a joint effort of Stena Line, Wärtsilä, the port of Gothenburg, the port of Kiel, and Methanex Corporation.

Stena Britannica is the second of two RoPax ships built for Stena Line by Nordic Yards in Wismar, Germany.

The project enabled Stena Line to meet the International Maritime Organisation’s (IMO) regulations, effective from January 2015, in the area around the Baltic and North Sea that is known as the Sulphur Emission Control Area (SECA). The new regulation calls for marine vessels to use fuel with very low sulphur content of 0.1%, whereas the previous restriction was 1%.

Based on the results of the project, Stena Line plans to convert 25 more vessels in its fleet to run on methanol.

The overall cost of the project was €22.5m (approximately $25.5m), 50%of which was met through a grant offered by the European Union’s Trans-European Transport Networks (TEN-T).

Stena Germanica (previously Stena Hollandica) was built by Astilleros Españoles. Stena Hollandica started operating the vessel in the Holland-Harwich route in 2001. The vessel was further converted in 2007 and 2010 and was ultimately renamed in 2010, before being moved for operations in the Gothenburg (Sweden) – Kiel (Germany) route in August that same year.

The vessel’s conversion in 2010 was performed by Cargotec as the main contractor. The electrical work and HVAC upgrades on the vessel were performed by Wilhelmsen Marine Engineering in late 2010.

The entire interior design of the vessel during its conversion in 2007 and 2010 was performed by Figura. A shore-to-ship power supply system for the vessel was supplied by ABB in 2012, enabling the vessel to shut down its diesel engines during its stay at the Port of Gothenburg.

Stena Germanica’s conversion into methanol-fuelled enginetena Germanica is the biggest ferry in the Nordic region and the world’s second biggest Ro-Pax ferry. It measures 240m-long and 29m-wide, and has a draft of 6.1m and lane metres of 3,907m. It can accommodate 300 cars, 1,300 passengers, and 46,353t in freight.

Stena Germanica provides 24 different categories of cabins and a Panorama Jacuzzi suite. The Metropolitan Restaurant provides an à la carte menu, while the Taste Restaurant serves buffets. Bars within the ferry include the C-View Lounge, the Riva Bar and the Sun Deck Bar with 180 seats.

The RoPax ferry is powered by four Sulzer 8ZAL40S engines, which enable it to sail at a speed of 25.1kt.

The technical designs of the methanol installations on the ferry were completed in 2013, and the preliminary laboratory tests using a methanol-modified Wartsila engine 6ZAL40S was performed for three days in October 2014.

"The RoPax ferry is powered by four Sulzer 8ZAL40S engines, which enable it to sail at a speed of 25.1kt."

Stena performed the onboard installation works, adaptation of HFO tanks for methanol, piping, and ship safety systems, while Wartsila was responsible for the methanol engine conversion. The vessel’s automation systems were upgraded by Metso.

The project further involved the design of a methanol distribution system, and the installation of a bunker vessel and storage tank at both ports. Preliminary approval studies for the conversion project were performed by Lloyd’s Register, who was also appointed to class the vessel.

The engine type selected for the project is the Wärtsilä-Sulzer eight-cylinder Z40S, which offers a combined propulsion power output of 24MW. The upgraded vessel is fitted with new dual-fuel injection nozzles, which are capable of injecting both methanol and diesel. Each engine is equipped with a high-pressure (600 bar) methanol pump.