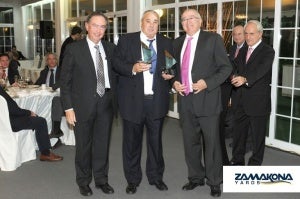 On Thursday 24 October, the Association of Naval Architects and Marine Engineers in Spain (AINE ) handed over the award for Best Spanish ship built in 2012 to Zamakona Yards. The event took place as part of the 52nd Congress of Naval Engineering and Maritime Industry, under the theme "Engineers and Engineering: The sea as an opportunity."

Zamakona Yards’ president Pedro Garaygordobil received the award from Luis Vilches Collado, dean-president of Naval Architects and Marine Engineers in Spain. The award certifies that the ship ESVAGT AURORA is the Best Spanish ship built in 2012. The event took place at a gala dinner held at the Club de Campo in Madrid. Zamakona Yards won the final at Metalships & Docks with the vessel North Ocean 105 and Armón Vigo shipyard with the ship Angeles Alvariño.

The shipowner is the company Esvagt AS, owned by the Danish multinational AP Møller-Mærsk. ESVAGT AURORA’s primary mission is to provide immediate assistance to emergency situations and to provide support to deep sea operations. The ship is specially adapted to service in adverse weather conditions in the Barents Sea. The vessel incorporates the latest cutting-edge technological developments for the launch and recovery of rescue boats, de-icing equipment to prevent accumulation on deck as well as equipment for pollution control. It meets the highest standards required by the Norwegian authorities for this type of vessels.

With this award, Zamakona Yards is positioned as market leader in Spain and Europe manufacturing offshore vessels. Zamakona Yards Group has facilities in Santurtzi (Vizcaya), Pasajes (Guipúzcoa) and Las Palmas of Gran Canaria (Canary Islands), with over 41 years of experience in shipbuilding and repairs of all types of vessels. We specialize in offshore vessels, fishing boats and tugs.

Zamakona Yards is one of Spain's main shipbuilding and ship repair groups. With more than 40 years of experience in the industry both in the...