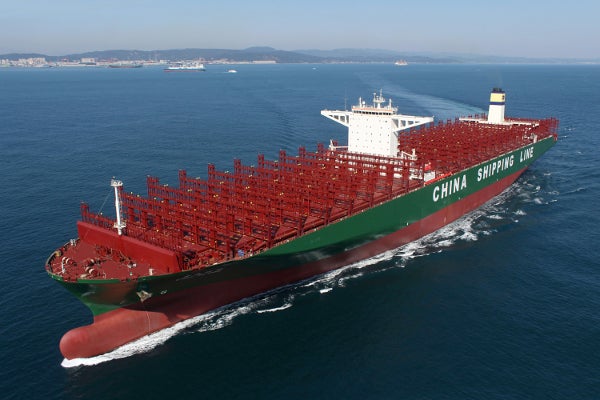 CSCL Globe is the first of five identical container ships to be built at the Hyundai Heavy Industries shipyard in Ulsan, South Korea, for Shanghai-based China Shipping Container Lines (CSCL).

Construction on the new ship began with the first steel cutting in January. Sea trials were successfully completed in October and the vessel was christened the CSCL Globe at a ceremony held at the Ulsan yard in November.

CSCL Globe recently embarked on her maiden voyage from the Tianjin Port to Europe through the Far East-Europe route.

The second 19,000TEU vessel, CSCL Pacific Ocean, is under construction at HHI’s shipyard and is scheduled to be delivered in the first quarter of 2015, along with the remaining three container ships.

The Globe will operate in the Asia-Europe AEX1 service trade-loop with stoppages at ports in the following regions: Qingdao, Shanghai, Ningbo and Yantian in China; Port Kelang, Malaysia; Felixstowe, UK; Rotterdam, the Netherlands; Hamburg, Germany; and Zeebrugge, Belgium.

The ship has been assigned the Environmental Passport-Design (EP-D) class notation, which meets Marpol regulations, as well as other environment-related IMO conventions, complying with upcoming requirements in ballast water management, ship recycling, bilge water separation and recovery of refrigerants.

The vessel features two EcoBallast seawater treatment systems, which can treat up to 3,000m³ of seawater an hour by filtering and sterilising bacteria and plankton larger than 50µm using ultraviolet rays.

The total container capacity of the ship was first specified as 18,400TEU, but increased to 19,000TEU due to the availability of more deck space in the design with no changes in technical design.

CSCL Globe, and her upcoming sister vessels of DNV GL class, carry the Route Specific Container Stowage (RSCS) class notation. The RSCS provides an efficient use of cargo space, offering flexibility on the number of containers on-board on a particular route without compromising on the safety of the ship.

Engine and propulsion details of the 19,000TEU container ship

The vessel’s propulsion system includes a low-speed MAN B&W 12S90ME-C Mark 9.2-type engine, which is the biggest engine ever built, with a height of 17.2m. The state-of-the-art, two-stroke engine was built at HHI’s engine-building division and can generate 69,720kW of power at 84 rotations per minute (rpm), but has been de-rated to 56,800kW.