Construction of the William Shakespeare cruise ship started in August 2013.
The river cruiser will sail in the European rivers of Rhine, Moselle and Neckar.
The ship features doors that completely slide away to the sides giving a more spacious look to the cabins.
The ship was ready to cruise in May 2014. 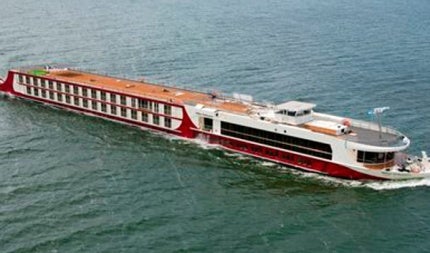 MS William Shakespeare is a luxurious five-star river cruise ship constructed by Dutch shipbuilder VEKA Group for Select Voyages, a river cruise company based in the Netherlands. The ship will operate on the European rivers of the Rhine, Moselle and Neckar.

VEKA started construction of the new cruise ship in August 2013 at its shipyard in the north of Holland. The construction was completed in a record nine months. The ship was christened at a ceremony held in June earlier this year at VEKA’s headquarters in Werkendam, Netherlands, before sailing to Germany to collect its first passengers in Cologne.

The 110m-long river cruiser has a moulded breadth of 11m and overall breadth of 11.45m. Its length between perpendiculars is 107.7m and its depth is 2.75m. The maximum draught and shallow draught of the ship are 6m and 1.6m respectively.

MS William Shakespeare has the capacity to hold 110m of fuel, 210m of fresh water and 330m of ballast water.

The exterior, featuring glass and polished stainless steel, supplements the sleek modern profile of the ship. The vessel is also equipped with advanced technologies and adheres to safety standards assuring guests a pleasant and safe journey.

Accommodation on board the five-star river cruise ship

MS William Shakespeare can accommodate 152 guests and 43 crew members in its 76 passenger cabins and 23 crew cabins.

The Hamlet and Othello decks are custom-built with rich mahogany furniture, leather, marble and Italian soft furnishings, and spacious marble bathrooms with a water closet and glazed shower. The cabins on the upper and middle decks include French balconies featuring floor-to-ceiling glazed doors.

An exclusive element of the ship’s design is the doors, which slide completely away against the ship’s side thus hiding, to further extend the lavish cabin area.

"An exclusive feature of the ship is the doors that slide completely away against the ship’s side."

The upper (Hamlet) deck features four exclusive deluxe suites of 22.8m2 with sliding glass doors, which lead to an outside balcony furnished with table and chairs.

The spacious 15m2 cabins in the middle deck are furnished with hotel-style beds, a safe, hairdryer, tea and coffee maker and an individually controlled air-conditioning unit. Other facilities in the cabins include a flat-screen TV with satellite channels, which also shows images of the ship’s position from a bow-mounted camera, two chairs and a small table.

Cabins on the lower (Romeo) deck are a little smaller at 14m2 with smaller, fixed windows. The rooms offer similar amenities except for the armchair and table. Cabins for sole occupancy are available subject to availability at no extra cost.

Dining and entertainment on board the river cruiser

MS William Shakespeare offers restaurants and lounges such as the Globe lounge and bar, the Welcoming bar at the front, and the Midsummer bar and restaurant at the rear of the ship on the Hamlet deck.

The Globe lounge’s classic and comfortable seating allows guests to relax and converse and enjoy the scenic views on both sides of the vessel. The Welcoming bar offers a range of fine wines and spirits sourced from all over the world. The Midsummer bar is fitted with large tinted windows and outside seating arrangements, providing intimate dining experience for only 24 diners who have booked in advance at no extra charge.

"MS William Shakespeare offers restaurants and lounges such as the Globe lounge and bar, the Welcoming bar and the Midsummer bar."

The ship has stairs and a lift leading to the Othello deck. Further, a flight of stairs descend downwards to the Romeo deck. Other facilities include a library with leather-effect wall linings, a small splash pool, giant chess, a small boutique and a reception. There is also a well-equipped wellness area in the Romeo deck of the ship, offering sauna and fitness equipment for guests. The ship also has a hairdressing salon and laundry service.

The sun deck houses the Bridge where guests can relax and sit at all times except when berthing or navigating locks.