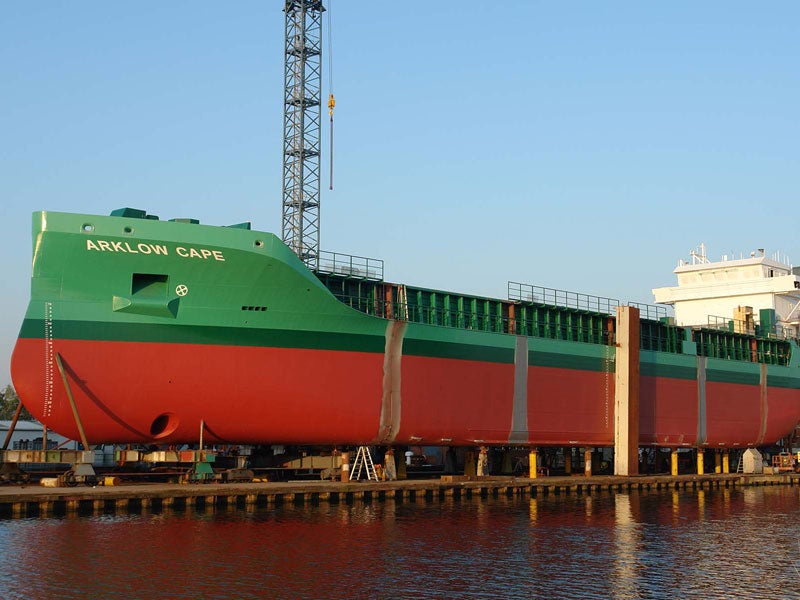 M.V. Arklow Cape is the second of ten general cargo vessels being built by Ferus Smit at its Westerbroek shipyard for Arklow Shipping, a company based in Ireland. The first ship in the series, M.V. Arklow Cadet, was delivered to its owner in 2016.

Arklow Cape was launched at the Westerbroek shipyard in October 2016 and delivered in late 2016. Designed to ship grain and bulk cargo, the vessel is deployed to transport wheat, corn and other bulk commodities in European waters.

Arklow Cape is a general cargo carrier with the 1A ice-class notation. It integrates a bulbless bow design that offers superior performance in various loading drafts and wave conditions. The vessel has an overall length of 87.40m, while its length between perpendiculars (LBP) is 84.99m.

The moulded breadth and depth of the ship are 14.99m and 7.12m respectively. The ship has a summer load draft of 6.26m and a minimum coaming height of 5.36m above the waterline.

The cargo hold is equipped with movable grain bulkheads, which can be placed in 11 positions for load separation. The main deck is equipped with a pontoon system with a length of 59.8m and width of 12.6m. The system offers a 1.75t/m² loading capacity and hatch panels that can be moved using a gantry crane on rails.

The ship features a strengthened tank top that supports a uniform load of 15t/m². It is equipped with systems for extinguishing fires, water ballast treatment and dehumidification. The strengthened bottom of the vessel also allows loading and unloading aground.

The on-board hold ventilation system preserves transported goods by supplying fresh air to the cargo up to eight times an hour. Ventilation also prevents cargo sweat and removes the odour of previous cargo. The vessel is also capable of transporting dangerous goods.

"The on-board hold ventilation system preserves transported goods by supplying fresh air to the cargo up to eight times an hour."

The vessel offers accommodation facilities for seven crew members. The cabins are equipped with an air-conditioning system and private sanitary facilities.

The vessel is powered by a MAK 6M25 six-cylinder diesel engine, driving a controllable pitch propeller (CPP) through a single gearbox.

The propulsion system enables the vessel to sail at a speed of 11kt.