The MV Troms Sirius platform supply vessel is based on the STX PSV 09 L design. Image courtesy of STX OSV.
Naming ceremony of MV Troms Sirius was held on 31 May 2012 in Stavanger.
MV Troms Sirius can carry up to 2,600t of cargo to offshore oil platforms. 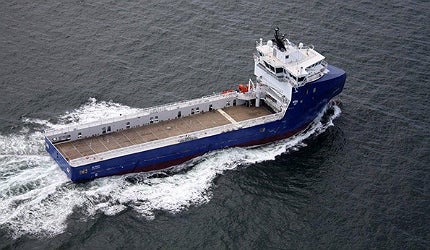 MV Troms Sirius is a DNV-classified Platform Supply Vessel (PSV) built by STX OSV. The vessel is owned by Clean Design Sirius and is operated by Troms Offshore Management. Troms Sirius is one of the largest PSV vessels currently operating in the North Sea.

In March 2011, Troms Offshore placed an order with STX OSV for the design and build of a Platform Supply Vessel (PSV). The keel for the ship was laid at STX Søviknes shipyard in July 2011. The vessel was launched in December 2011 and delivered to the owner in May 2012. The christening of MV Troms Sirius was held in Stavanger in the same month.

MV Troms Sirius has a design similar to that of Troms Offshore’s MV Troms Capella ship and will be operated by a crew of 28. It flies the Norwegian NOR flag and will be primarily deployed in the North Sea and the Barents Sea.

"Troms Sirius is one of the largest PSV vessels currently operating in the North Sea."

MV Troms Sirius is a monohull vessel based on the STX PSV 09 L CD design. The "clean design" PSV incorporates diesel electric propulsion for low fuel consumption and reduced emissions. The ship is equipped with fire-fighting systems and life-saving equipment such as MOB rescue boat and rafts.