NB 510 Icebreaker will be the world’s first LNG-powered icebreaker.
ABB will provide three azipod propulsion units to be outfitted in the NB 510 icebreaker.
The NB 510 vessel is capable of performing icebreaking operations in severe winter conditions in the Baltic Sea.
The icebreaking vessel is being built by Arctech Helsinki Shipyard and will be delivered in 2016. 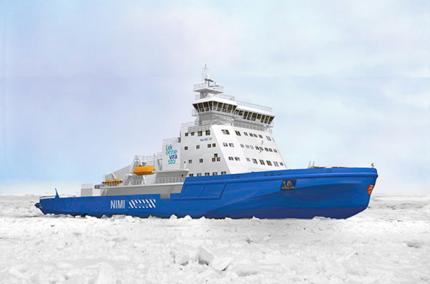 NB 510 Ice Breaking Vessel, being built at Arctech Helsinki Shipyard, will be the world’s first liquefied natural gas (LNG)-powered icebreaker, upon completion. Finnish Transport Agency will deploy the vessel to perform icebreaking operations in the Baltic Sea. The vessel is expected to be delivered by early 2016.

Baltika, also referred to as NB 508, is the world’s first oblique icebreaking multi-purpose emergency and rescue vessel being built at Arctech Helsinki Shipyard in Finland, for the Russian Federal Agency of Sea and River Transport.

Finnish Transport Agency ordered the icebreaking vessel in February 2014. The Finnish government has allocated €123m for the ship’s construction, while €24m will be funded by the European Union (EU).

The new icebreaking vessel was designed by Aker Arctic Technology in collaboration with Finnish consulting and engineering firm ILS.

The use of both diesel and LNG as fuel makes the Finnish icebreaker highly fuel-efficient as well as most environment-friendly with significant reduction in emission of harmful gases. The vessel will thus comply with the international IMO Tier III emission standards and special requirement for sulphur emissions in the Baltic Sea.

Arctech Helsinki Shipyard awarded the outfitting design contract for the first LNG-powered icebreaking vessel to Deltamarin in August 2014. The €1.8m contract includes outfitting of the entire machinery and technical spaces, and production design of the icebreaker, which will be performed using the AVEVA Marine Outfitting software.

The icebreaker will be 110m long and will have a maximum breadth of 24m. Its deadweight at maximum draught of 8m is approximately 3,000t.

"The icebreaker will be 110m long and will have a maximum breadth of 24m."

The vessel has been assigned Lloyd’s Register Classification under EMEA regulations and will have sea endurance up to 30 days.
The vessel will provide accommodation for 24 personnel and have provision to carry additional crew during oil spill response operations.

Icebreaking operations of the NB 510 vessel

The NB 510 will feature state-of-the-art technology and equipment fitted to primarily perform icebreaking operations in the demanding conditions of the northernmost Baltic Sea. Its double-hull arrangement will protect all the vital tanks aboard.

The special hull form and propulsion system will enable the ship to minimise ice resistance and maximise ice breaking capacity to move continuously through 1.6m-thick ice and will be able to create a 25m-wide channel in 1.2m-thick ice sailing at a speed of 6kt. It will be outfitted to operate in temperatures even below -30°С.

"The vessel will be capable of sailing at an average assistance speed of 9kt to 11kt."

The vessel will be capable of sailing at an average assistance speed of 9kt to 11kt. The service speed of the vessel in open water will be 16kt.

The icebreaker will also be fitted with special equipments to perform oil spill response operations and emergency towing under severe climatic conditions during winter and summer. It will be operational throughout the year to ensure safe movement of vessels in the Baltic Sea.

The vessel’s propulsion system will consist of three ABB azipod propulsion units including one 6MW unit at bow and two 6.5MW units at stern for easy manoeuvrability and ice breaking performance of the vessel, especially in heavy-ridged and rafted ice.