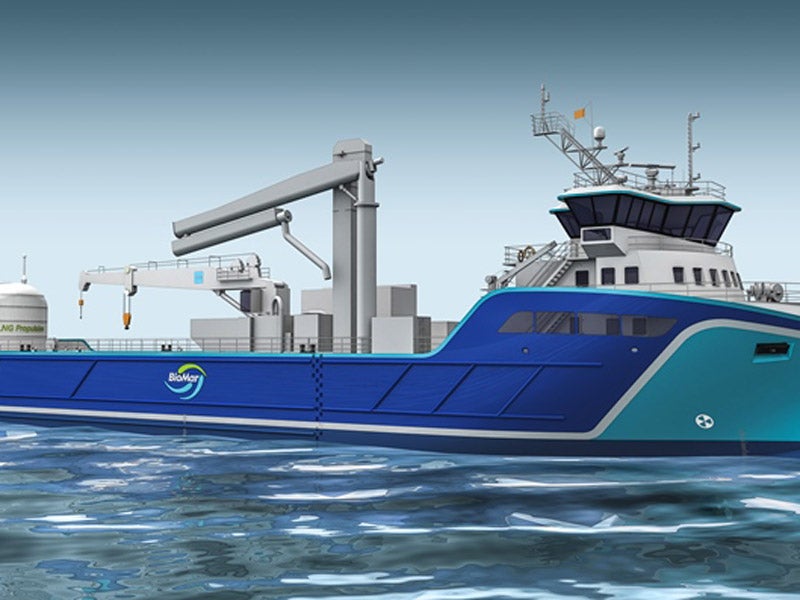 BioMar Group, a global fish feed manufacturer and supplier, ordered a new LNG-powered cargo vessel from Norwegian ship-owner, NSK Shipping, in February 2016. The vessel will be deployed to supply BioMar’s fish food to fish farms along the Norwegian coast.

The new vessel, named NSK 3433 Fish Pellet Carrier, will be slightly larger than its sister ship MS Høydal, the world’s first LNG-powered cargo vessel, which was delivered in 2012.

The environment-friendly NSK 3433 vessel is designed by NSK Ship Design and will be owned and operated by NSK Shipping, which already owns and operates MS Høydal and MS Nyksund, two important vessels in BioMar’s existing fleet.

BioMar has 11 fish food-producing factories in Norway, Chile, Denmark, Scotland, Spain, France, Greece, Turkey and Costa Rica.
The new feed carrier is being built by Tersan Shipping at its Turkish shipyard and is scheduled to be delivered in 2017.

It will be equipped with a 50t-crane and will have a cargo capacity of 2,700t. It can accommodate seven persons and sail at a speed of 12kt.
Other factors considered during the planning process include the use of modern hulls and propulsion systems for bigger vessels to reduce freight costs and environmental footprint.

The vessel will be fitted with a LNG propulsion system comprising one eight-cylinder Bergen C26:33 natural gas engine rated at 2,160kW, combined rudder and propeller system, one tunnel thruster in the bow and one in the aft, and an automation and dynamic positioning (DP) system.

It will also be equipped with hybrid shaft generator (HSG) propulsion system, which generates electrical power even if the engine power output varies, thus saving the fuel. The HSG can also act as a propulsion motor (PTI) and provide an alternative power source when LNG becomes unavailable, an option that is a prerequisite for class approval.

Bergen gas engines are the only pure gas engines that use a spark plug ignition, whereas alternative dual-fuel engines use a small amount of diesel for ignition.

NSK 3433 fish pellet carrier will be fitted with a dynamic positioning (DP) system, supplied by Rolls Royce, which enables the vessel to achieve optimum manoeuvrability through which it will unload the feed without mooring.

It will also be installed with fish-feed handling equipment that is efficient and gentle on the feed.

Norwegian Deck Machinery (NDM), which recently became a fully-integrated part of Palfinger Marine, secured the contract to supply deck machinery for the NSK 3433.

Rolls-Royce is supplying the liquefied natural gas (LNG) propulsion package worth $6.5m to the Tersan Shipyard.

Sustainability of the fish pellet carrier

The use of Bergen natural gas engines significantly reduces the carbon-dioxide (CO2) and nitrogen-oxide (NOx) emissions by 22% and 90% respectively, compared to a diesel engine.

The engines also reduce the fuel and lubrication oil consumption. In addition, the clean and safe engine rooms, which use advanced technology, reduce maintenance costs and provide a more comfortable working environment for the crew.