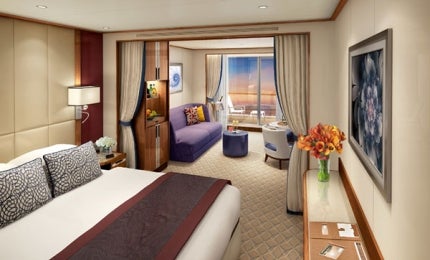 Seabourn Encore is the first of two ultra-luxury cruise ships ordered by Seabourn from Fincantieri. The cruise ship was  delivered in November 2016.

A steel-cutting ceremony was held for the vessel in April 2015 at the Fincantieri shipyard in Marghera, Italy, and the keel was subsequently laid in September 2015.

Seabourn Encore will be complemented by its sistership Seabourn Ovation, which is currently being built by Fincantieri.

The two new vessels are intended to replace the capacity that was lost by the recent sale of the Seabourn Pride, Sea bourn Spirit and Sea bourn Legend cruise ships to Windstar Cruises.

The vessel’s design is primarily based on the Seabourn Odyssey fleet. It also includes various new features compared with the Odyssey-class vessels, including an additional deck, expanded public areas, a reduction in passenger capacity and a private veranda for each suite. The vessel features 12 decks with 300 luxury suites.

The design works relating to the ship’s indoor and outdoor guest areas have been entrusted to the renowned hospitality designer Adam D Tihany. In addition, the ship houses a signature restaurant by the American chef and restaurateur Thomas Keller.

Seabourn Encore is 210m-long and 28m-wide, featuring a gross tonnage capacity of 40,350t. Its propulsion system enables the ship to cruise at a maximum speed of 15k.

The vessel was built to comply with all legislative safety requirements and its hydrodynamics have been optimised to reduce fuel consumption.

Deck 3 houses the marina, and Deck 4 features a fine dining venue called The Restaurant, a medical facility and a galley.

Deck 5 comprises 36 veranda suites and public areas, including a casino, The Club, a pool and two whirlpools.

Deck 6 features a total of 60 veranda suites and the Grand Salon, which features a theatre for performances with chairs arranged in cabaret style seating, as well as a bar pantry at the back. The design of the Grand Salon was unveiled in August 2015 and is decorated with sculpture panels and lineal lights on the ceiling.

Deck 9 will feature 38 Veranda Suites, the Patio Grill, Patio Bar, a whirlpool, swimming pool and a casual snack bar known as The Colonnade.

The Sun Terrace and The Retreat are featured on Deck 12.

Accommodation and amenities onboard Seabourn Encore

Adventure of the Seas is the third of five Voyager-Class cruise ships that have been built for the Royal Caribbean Cruise Line.

All Owners’ Suites offer dining facilities for four people, a separate bedroom, guest bath, two flat-screen TVs and a pantry with a wet bar, in addition to a convertible sofa-bed for one and a whirlpool bathtub.

Penthouse suites are provided with a separate bedroom, a glass door to the veranda, two flat-screen TVs, a fully stocked bar, a spacious bathroom with tub and shower, and a makeup vanity.

The Winter garden Suites are furnished with dining facilities for six people, a whirlpool bathtub, guest bath, a convertible sofa-bed for one, a pantry with a wet bar and a glass-enclosed solarium with tub and day bed, as well as two closets and two flat-screen TVs.

Seabourn Encore’s official maiden voyage was conducted in February 2017 and included a ten-day voyage starting from Bali, with stops at Surabaya in Java, Celukan Bawang in Bali and Slawi Bay in Komodo Island, Indonesia.

Fincantieri has subcontracted AEG Power Solutions to supply power systems and solutions for the vessel. The contract will mainly involve the supply of both AC (Protect 8 and Protect 4) uninterruptible power supply (UPS) and DC (Protect Three Phase Rectifier) systems.