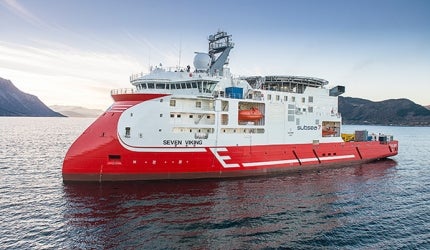 Seven Viking is a subsea inspection, maintenance and repair (IMR) vessel designed to operate under severe conditions in the North Sea. The vessel is co-owned by Subsea 7 and Eidesvik and was constructed in collaboration with Ulstein.

The naming ceremony for the vessel was held in January 2013 after it cleared sea trials, which commenced in November 2012. She was earlier launched in October 2012 from the dock hall at Ulstein Verft where she was constructed. The cost of construction of the vessel was about NOK 1bn ($181m).

Designed with an X-Bow hull line, Seven Viking will now serve Statoil, confronting extreme conditions in the North Sea, for a period of five years.

"The naming ceremony for the vessel was held in January 2013 after it cleared sea trials, which commenced in November 2012"

Seven Viking measures 106.5m in length and has a moulded breadth of 24.5m. The compacted dimension of the vessel, featuring the SX148 design, will enable it to access difficult areas and operate in confined spaces between offshore platforms. The deck of the vessel covers an area of about 830m² and the vessel has a gross tonnage of 11,266t.

The depth of the vessel to the main deck is 11.5m and the maximum draught is 8m. The designed operational draught is 6.5m.

The vessel features a helideck that is capable of accommodating SuperPuma and Sikorsky S-92. The helideck measures 26.1m in diameter and has capacity of 12.8t.

Two lifeboats are incorporated into the vessel. The boats have capacity of 48 people, and there are two marine evacuation chutes (MES) with a capacity for 65 persons each and a fast rescue craft (FRC).

The vessel is also fitted with a ballast water treatment system, environment friendly lighting systems and a fire detection and fire fighting system.

Seven Viking accommodates 90 people in 59 one-bed cabins, three two-bed cabins and five state cabins. Facilities aboard the vessel include a hotel, a hospital, a day room, a mess room, a smokers’ room, a games room, a conference room, a heli lounge / film room and a fitness room.

The vessel also has a lift with a capacity for 16 persons with six stops between the main deck and heli lounge / film room.

Seven Viking is provided with a main active heave compensated (AHC) offshore crane with a wire length of 2,000m and a deck lift of 135t at an outreach of 13m.

The vessel is equipped with S-band and X-band ARPA radars, ECDIS digital chart system, radio installation based on GMDSS-area A3 and Satcom C and two V-Sat communication antennas.

Havila Subsea is a supply vessel built to perform inspection, maintenance and repair (IMR) works in the North Sea and other parts of world.

The propulsion system incorporated into the vessel enables it to operate at a top speed of 17kt.

An electrical driven skidding system with a range of up to 70t weight was supplied by Malm Orstad.