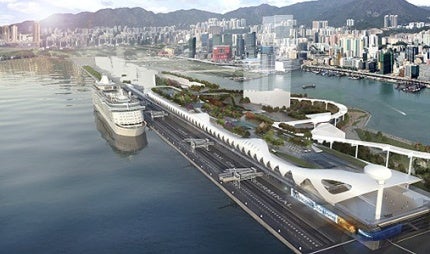 Kai Tak Cruise Terminal in Hong Kong comprises two berths and a terminal building. It is located at the south-eastern end of the former Kai Tak Airport’s runway within Victoria Harbour.

"The second berth was completed in September 2014."

The first berth and the terminal building received the inaugural berthing of a Mariner of the Seas cruise liner in June 2013, while the second berth was operational in September 2014. The estimated cost of the project is HK$8.2bn ($1bn).

The terminal is strategically located within ten miles of all major urban areas of Hong Kong. The operator of the terminal is Worldwide Cruise Terminals, which is jointly owned by Worldwide Flight Services (60%), Royal Caribbean Cruises (20%), and Shun Tak Holdings (20%).

The cruise terminal is capable of berthing two mega-size cruise ships simultaneously, each with more than 4,000 passengers and 2,000 crews, after the dredging works at the second berth are completed in 2015. The terminal is equipped with five Seaport Passenger Boarding Bridges.

The building comprises three main levels covered by an arrangement of fin-like roof structures that enable daylight to filter through to the passenger waiting spaces. A pedestrian route starting from the waterfront public area stretches up through the building and opens on to a large public roof garden, providing open and sheltered spaces for recreational purposes.

"The terminal is strategically located within ten miles of all major urban areas of Hong Kong."

The ground floor encompasses the baggage handling area, customs hall, back office functions, passenger departure hall pick-up area, and a coach staging area. Private car and taxi drop-off areas are located a level above the ground floor. The second floor of the building incorporates the passenger check-in and waiting halls, as well as a public colonnade, and ancillary commercial areas.

The building has adopted a wide-span design, allowing the interior to have a clear structural span of 41m. The passenger waiting halls on two floors can be converted to a multipurpose venue to be used for conferences, exhibitions and banquets during the non-peak seasons of cruise operations.

The project was implemented under two contracts, with the first comprising the site formation works and the second consisting of the construction of the cruise terminal building and ancillary facilities.

The site formation works commenced in November 2009 while construction of the terminal building started in May 2010.

"Each berth of the terminal can accommodate cruise ships up to a gross tonnage of 220,000t."

The site formation works commenced in November 2009 while construction of the terminal building started in May 2010.

Royal Haskoning collaborated with Au Posford Consultants to review the design requirements and outlined the performance specifications for the Seaport Passenger Boarding Bridges.

The mechanical, electrical and plumbing (MEP) contractor for the project is BYME Engineering.

A solid-state radar, which is placed above a 55m-high tower at the terminal, was provided by HITT. The radar is integrated with the existing vessel traffic system of the Marine Department and is share used by the Customs & Excise Department.

AMG completed the delivery of the transmission technology for the security and surveillance project of the Kai Tak Cruise Terminal in April 2015.