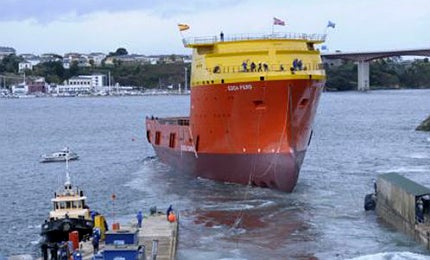 Edda Ferd is the latest platform supply vessel (PSV) to be commissioned into the fleet of Ostensjo Rederi in October 2013. The vessel was earlier launched in October 2012. It is being constructed by Astilleros Gondan at its Figueras facilities in Spain.

The vessel is being constructed as part of the Mindset (Marine Industry Superior Environmental Thinking) programme launched by Ostensjo Rederi in 2011. The programme primarily aims to reduce the environmental footprint on the company’s business activities.

The vessel, when delivered, will be the most environmentally-friendly PSV in the world, using 25% to 30% less energy compared to other conventional PSVs.

The vessel is designed to operate in the North Sea. It will serve Shell UK in offshore operations in the North Sea for a period of five years, as part of its first contract.

The vessel won the Offshore Support Journal (OSJ) Environmental Award in 2013 and was also nominated for the Next Generation Ship Award at the Opening Conference of Nor-Shipping in 2013.

Skipsteknisk provided the design of the vessel. Carl J. Amundsen Consulting Marine Engineers and Naval Architects is also involved in the project.

A new propulsion concept for the vessel was used by the owner in collaboration with Siemens, incorporating the latter’s BLUEDRIVE PlusC system for fuel efficiency.

"It will serve Shell UK in offshore operations in the North Sea for a period of five years, as part of its first contract."

The PSV will be further equipped with a tank washing system with a discharge rate of 30m³ per hour, and five discharge piping systems.

The PSV will have a capacity to accommodate more than 40 people in 18 single cabins and 11 double cabins. Facilities onboard the vessel will include a hospital, two offices, dayrooms, a conference room, a mess room, a gymnasium, a galley and a freezing room. The accommodation facilities will be fully ventilated and provided with air conditioning.

The vessel will provide lifesaving facilities for 40 people. It will be equipped with six liferafts with a capacity of 25 people each and an Alusafe 770 Mk2 rescue boat. Firefighting facilities onboard the PSV will include water, a foam pump and monitors on the cargo deck area.

The propulsion system of the vessel will be a battery hybrid power station with two Voith Schneider Propellers (VHP) of 2,700kW each and two AC asynchronous water-cooled motors of 2,700kW each.

"The PSV will have a capacity to accommodate more than 40 people in 18 single cabins and 11 double cabins."

Edda Ferd will also be fitted with two electric driven low noise tunnel thrusters with a power capacity of 1,400kW each and one rim driven tunnel thruster with a power output of 800kW. The environmentally-friendly PSV will be capable of sailing at a speed of about 16kt.